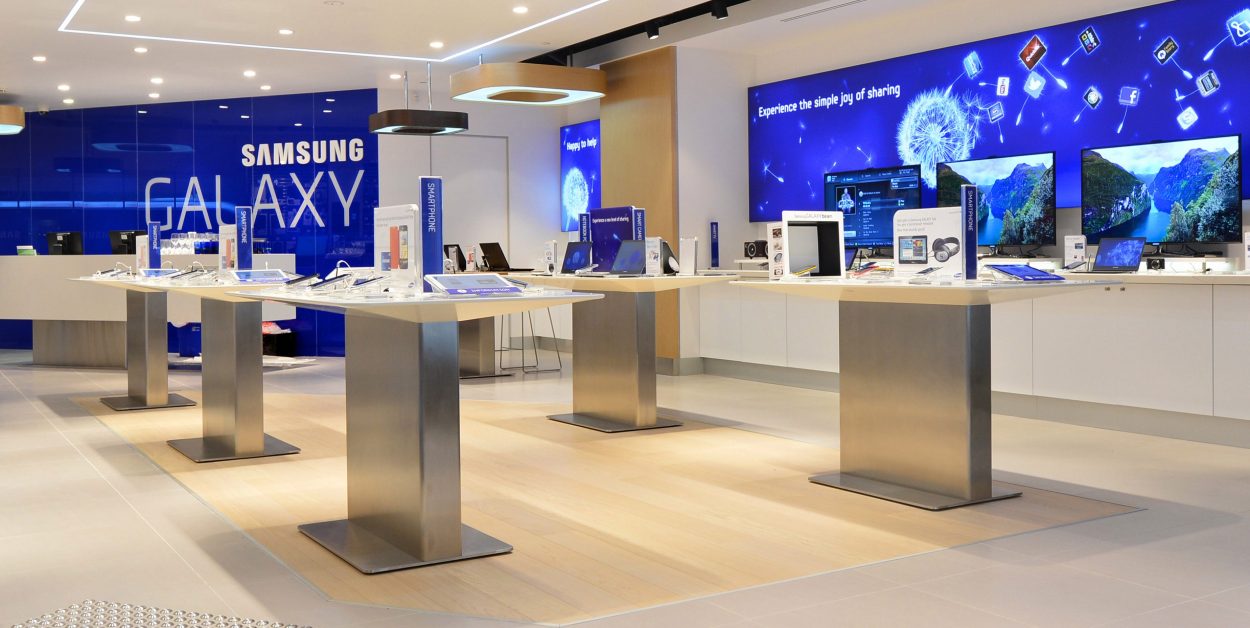 Samsung continues to lead the world in smartphone market share with Huawei recently passing up Apple for the second spot. Samsung offers a range of smartphones with the A-series, S-series, Note line, and new foldable Android smartphones.

The latest figures for worldwide smartphone market share show that Samsung continues to lead the world with 20% of the market. Huawei is just behind at 17%, while Apple follows with 14%.

Keep in mind Samsung’s latest phones are the Galaxy S20 series and new A51, with a new Note lineup launching in the next few months. It’s second foldable phone is available — with rumors of a Fold successor launching soon, too.

But if you’re looking for a Samsung handset available now, these are the top choices.

Samsung announced the Galaxy S20 series earlier this year and it’s clear the phone is built for business and captures the crown for the best 5G device available today.

The focus on the S20 line this year is universal 5G and improved camera experiences. The camera on the S20 Ultra had some auto-focus issues at launch that has since been fixed with updates. The camera is different than previous Samsung devices and the large main sensor doesn’t support macro mode like Samsung phones of the past.

The Samsung S20 Ultra 5G is powered by a Qualcomm Snapdragon 865, a 6.9-inch AMOLED 120Hz refresh rate display, 12GB RAM (with 16GB option), 128GB to 512GB storage options with a microSD for even more capacity, three rear cameras with very high hybrid zoom levels, IP68 rating, WiFi 6, and Bluetooth 5. A battery capacity of 5,000mAh ensures you can get through a full day.

5G is supported in the S20 Ultra 5G, across all available bands in the US. It’s an expensive phone, but future-proof for 5G so that is worth it for businesses. It’s a very large phone, but this size also means you can get real work done on the 6.9-inch display.

Given that the Galaxy S20 Ultra 5G is a very large phone, the S20 Plus 5G may be the better option for the masses. It feels much better in the hand and offers nearly the same capability as the S20 Ultra 5G, at prices $200 less.

The Samsung S20 Plus is powered by a Qualcomm Snapdragon 865, 6.7-inch AMOLED 120Hz refresh rate display, 12GB RAM, 128GB to 512GB storage options with a microSD for even more capacity, three rear cameras, IP68 rating, WiFi 6, and Bluetooth 5. A 4,500mAh battery keeps you going for at least a day.

The Galaxy Note 10 Plus is an excellent enterprise smartphone with a Qualcomm Snapdragon 855 processor, massive amounts of RAM, fast internal storage, microSD card expansion, capable rear quad-camera system, and much more. There is no 5G across the Note 10 series, but there is a variant for 5G on T-Mobile. The focus here is on the S Pen experience and 5G is sure to launch across the series this year.

The Samsung Galaxy Note 10 Plus has a Link to the Windows button in the quick controls area along with support for the latest version of DeX. Extending it to an external monitor with Samsung DeX is quick and easy, while also providing a full functioning desktop experience. The additional capability to charge up other devices and gear, such as the Galaxy Buds, via wireless technology on the back of the Note 10 Plus is convenient for road warriors.

The Note 10 Plus starts at $950 and will likely drop further when the Note 20 is announced. There are also generous trade-in options available.

The focus on the S20 line this year is universal 5G and improved camera experiences. The S20 5G is the most affordable S20 model, currently starting at $800. Other than smaller size, there are not many differences between this S20 and the S20 Ultra model.

The S20 5G is powered by a Qualcomm Snapdragon 865, 6.2-inch AMOLED 120Hz refresh rate display, 12GB RAM, 128GB to 512GB storage options with a microSD for even more capacity, three rear cameras, 4,000mAh battery, IP68 rating, WiFi 6, and Bluetooth 5. The S20 does not support high band (mmWave) faster 5G networks, but these have limited range and in the current coronavirus situation is not as useful as longer-range low-band 5G networks.

The Samsung Galaxy Note 10 has a slightly smaller 6.3-inch display compared to the Note 10 Plus 6.8-inch display. With this smaller display comes a smaller capacity 3,500mAh battery. It also does not have the TrueDepth sensor on the back.

You still get the full S Pen experience and the Note 10 is easier for people to handle with its smaller size. 8GB of RAM is also provided, which is still plenty to get work done.

The Samsung Galaxy Note 10 has a Link to the Windows button in the quick controls area along with support for the latest version of DeX. Extending it to an external monitor with Samsung DeX is quick and easy, while also providing a full functioning desktop experience. The additional capability to charge up other devices and gear, such as the Galaxy Buds, via wireless technology on the back of the Note 10 is convenient for road warriors.

The Galaxy Note 10 is currently priced at $800 so as you look across available $800 phones you need to decide what is most important to you.

It sold with limited availability for a price of $1,400, but the people who did pick one up seemed to love the design and construction.

The phone has a large 6.7-inch AMOLED screen when unfolded and closes in half to make it more portable. It is powered by a Qualcomm Snapdragon 855+ processor, 8GB of RAM, 256GB of internal storage, and a small 3,300mAh battery. Battery life is one concern with this phone, especially at a high price.

The Z Flip has dual rear cameras and a side fingerprint sensor. It is a capable phone, but more of a fashion statement than a business phone.

The 2020 Apple iPhone SE has been garnering attention due to its $400 starting price. Samsung just launched its first A-series device in the US with the Galaxy A51 and it looks to take on the iPhone SE directly with the same $400 price.

Specifications indicate Samsung is launching a serious iPhone SE contender here that even has a 3.5mm audio port. There is no dust/water resistance, but otherwise, it looks to be a capable device.

Everyone knows Samsung for its Galaxy S line of smartphones, the latest being the highly praised Galaxy S20 line of devices. That’s not all Samsung has been known for in the smart device space, however. The Korean hardware juggernaut has also made a slew of tablets alongside its smartphone line. Here is a collection of some of the best of Samsung’s Galaxy Tab line.

The Galaxy Tab S6 is the latest flagship tablet from Samsung and it’s quite impressive. The Tab S6 is touted to last up to 15 hours on a single charge while including the S Pen in the box. Under the hood, you get Qualcomm’s Snapdragon 855 and either 6GB or 8GB of RAM, along with either 128GB or 256GB of expandable storage. You can also pair it with its keyboard accessory and turn it into a makeshift laptop!

The Galaxy Tab S5e is considered to be Samsung’s “affordable premium” tablet, and it has a lot to offer. Powered by the Qualcomm Snapdragon 670 and 4GB of RAM, the Galaxy Tab S5e offers good performance for most tasks. It also has a gorgeous 10.5-inch OLED screen that looks great for movies and games, especially at this price point. If you want a higher-end experience without going broke, it’s a solid choice.

Speaking of affordable Samsung tablets, another option you’ll want to consider is the Galaxy Tab S6 Lite. The S6 Lite actually has slightly lower specs than the Tab S5e, such as a 10.4-inch LCD display and a slower Exynos processor, but the big draw here is that it comes with a free S Pen in the box. This makes it an excellent choice if you want a cheap tablet for drawing or doodling.